You are here: Home / Children Stories / The Swineherd 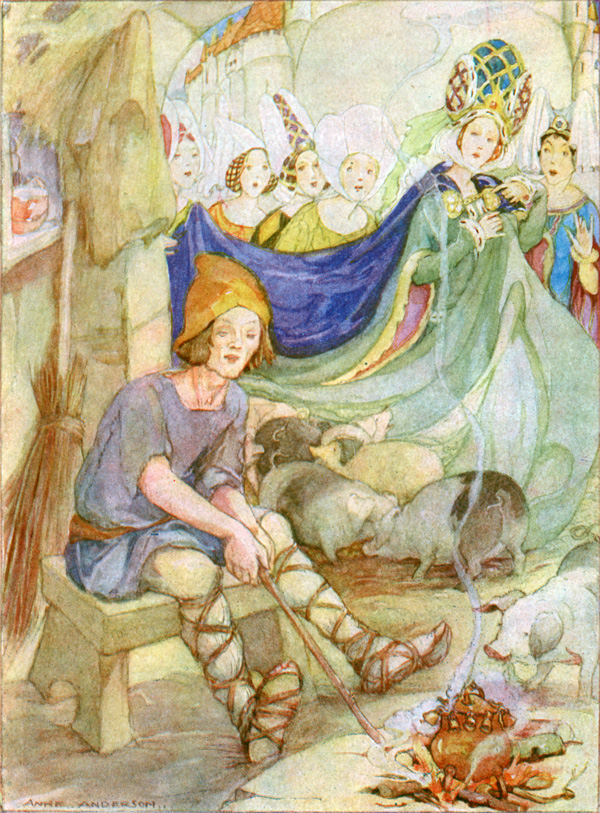 Once upon a time, there lived a poor but very handsome prince. The kingdom of the prince is very small but it is still big enough to ask the marriage of other princesses from other kingdoms.

Although the prince’s kingdom is very small, he is very famous. If he would send proposal letter to all the princesses, he will definitely get at least 100 princesses replying to his request.

At the place where the father of the prince was buried, there grew a most beautiful rose plant that only bear flower once in a lifetime. The smell of the rose is so sweet that if you will forget all your problems by inhaling its fragrance.

When they arrived, the emperor had them taken into a big hall where the princess is playing. When the princess saw the gifts, she clapped her hands happily.

The princess said, “I wish I get a pussy cat for my present!” ad she open one of the silver caskets to see what’s inside. To her surprise, she found a lovely rose in it.
All the ladies in the palace court says, “Wow! The rose is so beautiful!”

The emperor says, “The rose looks more than beautiful. It is very magnificent!”

Only the face of the princess is gloomy. The princess touched the ros and she was about to cry.

The princess says, “Papa! It is a real rose not a fake rose.”

The emperor says, “Let’s see what is in the other casket before it spoils our mood.”

The ladies at the palace court says, “Wow! This little bird can sweet such sweet melodies.”

The old knight says, “The music that the little bird sings reminds me of the empress’ music box.”

The emperor says, “Yes!” and he wept like a child.

The princess says, “I hope this bird is not a real bird.”

But the men who brought them says, “Yes. The bird is a real bird.”

The princess was not so easily disappointed. He decided to disguised himself as a slave who wants to hire himself at the princess’ kingdom.

The prince colored his face with dirty brown and black then he put cap over his ears.

The prince knocked at the door and says, “Good morning! I would like to hire myself at the palace. Is there any job I can do at the palace?”

The emperor says, “Sure! I need someone to look after my swine herd.”

So the prince was hired as the “Royal Swineherd”. The prince was given a small and stinky room near the pigsty where he works all day.

After he returned from work to his little room, he sit there the whole day and made a beautiful kitchen pot. The kitchen pot has many little bells hung around it and it sings an old melody:

The most amazing thing about this kitchen pot is that if you held your finger over the smoke when it is cooking, you will smell all the dishes that were being cooked in the city.

The princess happened to pass by the way when she heard the kitchen pot playing the melody. She is very pleased with it because the music, “Lieber Augustine” is the only piece of music that she can play and she can plays it with one finger.

The princess loves the music very much and wants to have the kitchen pot. So she sends one of her maidservant to the Swineherd.

The maidservant said to the Swineherd, “What do you want in return for the kitchen pot.”

The Swineherd says, “Tell the princess I will give her the kitchen pot if she kisses me ten times.”

The maidservant hurried back to tell the princess about it.

The princess says to the maidservant, “How rude is that! Ask the Swineherd if he will accept ten kisses from one of my maidservants.”

The Swineherd replied, “I want only the princess to kiss me ten times.”

The princess says to her maidservants, “All right. But please stand before us so that no one will see us kissing.”

That day, the princess made the kitchen pot boil all evening and she knows what was being cooked at every fire in the city.
Once again, the Swineherd sat down in his little room all day and he finally wrought a rattle instruments. The most amazing thing about this rattle instrument is that when you swing it around, you will hear all kind of waltzes and jig tunes since this world began.

So the princess sends her maidservant to the Swineherd.

The maidservant asks the Swineherd, “What will you take in return for the rattle instrument? The princess says she would give you anything except kisses.”

The Swineherd replied, “I will give the princess the rattle instrument if she kisses me 100 times.”

The Swineherd replied. “Nope. I want only the princess to give me 100 kisses.”

Then the princess says to all her maidservants, “Stand all around me and the Swineherd so that no one will see us kissing.”

The maidservants stand around the princess and the Swineherd so that no one can see them kissing. Everyone was so engrossed in watching them kissing that no one notices that the emperor was passing by.

When princess was kissing the Swineherd for the 86th times, the emperor saw them and he was very angry.

The king said to both the princess and the Swineherd, “Get out of my kingdom!”

The princess and the Swineherd are both thrown out of the kingdom. The princess regretted saying, “Alas! I am thrown outside the city. I should have marries the handsome young prince.”

Then the prince washes the black and brown dirt off his face and put on his princely robes. The prince looks so elegant that the princess come and bows down before him.

The prince says to the princess, “I came to despise you. You would not take the lovely rose and nightingale but would go after the trumpery plaything. You deserve your consequences.”

The prince went back to his palace in his own little kingdom and shut the door in her face. Now the princess might as well sing,