You are here: Home / Children Bible Stories / The Story of Samuel and Eli 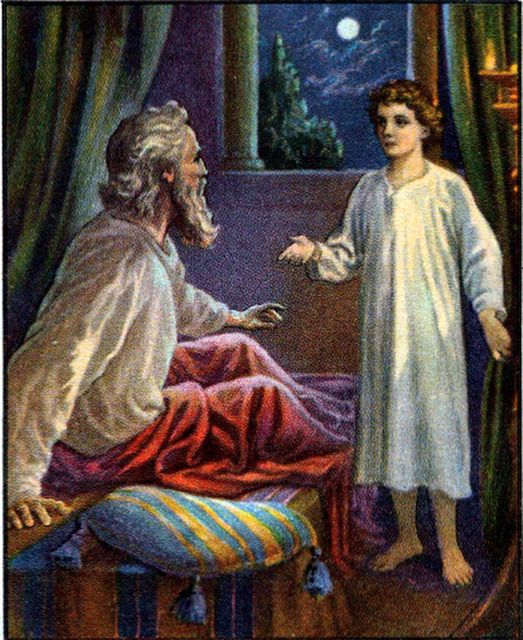 During the days of Eli, God seldom speak to people through dreams and visions.

But one day, while everyone is sleeping, God called Samuel, “Samuel! Samuel!”

Samuel thought Eli called him so he ran to Eli and said, “Here I am.”

Eli answered, “I did not call you. Go back to sleep.” So Samuel go back to his mat and sleep.

Samuel ran to Eli again and answered, “Here I am.”

Eli said to Samuel, “I didn’t call you. Go back to your bed.”

God never spoke to Samuel before so Samuel was not familiar with His voice.

So Samuel got up and ran to Eli again and he said, “Master, here I am. What can I do for you?”

Eli realized that the voice that had been calling Samuel is the Lord so he said to Samuel, “The next time you hear the voice calling your name, say, ‘Lord, Here I am. What can I do for you?’ ”

Samuel went back to lie down on his bed. God stood beside Samuel and said, “Samuel! Samuel!”

Samuel answered, “Lord, Here I am. What do you want me to do for you?”

God said to Samuel, “I am going to punish Eli and his two sons Hopni and Phinehas because they had shown disrespect on the sacrifices the people offered to me.”

The next day, Samuel woke up and walked into the temple of the Lord.

Samuel didn’t went ahead to tell Eli what the Lord had spoken to him because he was afraid of Eli.

But Eli said to Samuel, “Samuel, my little boy, come and tell me everything that God had spoken to you last night. If you don’t tell me what God told you, I pray that God will punish you.”

So Samuel told Eli everything the Lord had told him.