You are here: Home / Animal Stories / The Fox and the Mask 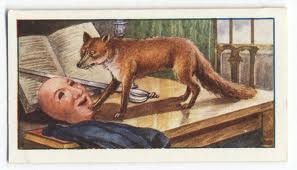 A jay came into a backyard where there are many peacocks.

Then the jay walk along with the peacocks. When the peacocks found out that the feather on the jay’s tail is not real, they peck at it until they plucked away all his borrowed feathers.

The jay couldn’t do anything so it returned to be among his own kind.

When the other jay bird saw him, they were very annoyed and say to him, “It is not the beautiful feathers that make up a fine bird.”