You are here: Home / Children Stories / The Emperor’s New Clothes 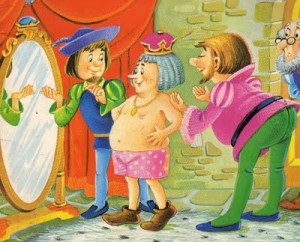 Once upon a time, there lived a vain and lazy emperor who only cares to spend all his money on buying new clothes; but don’t care about running his kingdom.

The emperor also seldom go to the theatre to watch show unless if going to the theatre, gives him an opportunity to show off his new clothes.

When the emperor heard the news, he thought to himself, “This must be the most awesome clothes. If I wear have this invincible clothes, I will know who is unfit to work for me.”

The two crook weavers set up two looms. They pretend to work on the weaving machine with the purest gold and silk thread although they really are doing nothing.

The emperor said to himself, “I would like to know how the weavers are doing. I will send my faithful old ministers to see how they are doing,”

The two crooks politely asked the faithful old minister to comes near to see their weaving looms and ask him if the colors of the new emperor’s clothes is beautiful or not; and whether the design is nice.

But the faithful old minister still couldn’t see anything. He said to himself, “Could I be a fool? I would not say anything about it or people will laugh at me.”

The two crooks asked the faithful old minister, “Well, sir! You haven’t tell us what you think about the emperor’s new clothes that we are working on.”

The faithful old minister replied, “Oh! They are the most beautiful clothes I have ever seen.”

A few days later, the emperor sends another of his palace official to check on his new clothes that the two weavers are working on. The palace official is the same with the faithful old ministers.

He looks and looks at the weaving looms but he couldn’t find anything there. He thought to himself, “I am definitely not a simpleton!” So he said to the two crooks, “The emperor’s new clothes is really magnificent. Good job!”

This time the emperor decides to go to see the new clothes that the two weavers are working on himself.

He was accompanied by several palace officials including the previous ones which he hired to check how the two weavers are getting on.

When the emperor came to the room of the weavers, the weavers pretends to hold something up, saying, “Here is your new clothes! It is one of kind in the world given it is invincible and no one can see the clothes that you put on.

The emperor was very shocked because he couldn’t see the clothes which the two weavers are holding. He thought to himself, “Could I be stupid? I must not let anyone know.” So the emperor remarked, “ This is a delicate and magnificent suit!”

When the clothes are ready, the two crooks undressed the emperor and pretend to help the emperor to wear the invincible clothes.

Then the emperor walks under a canopy in a procession lined up with people on the right and left to see his new invincible clothes. Everyone cried out, “How wonderful His Royal Highness in his new clothes!”

A little boy whispered to his father, “But the emperor is naked!” His father exclaimed, “Listen to the voice of the child who is innocent.”

At last everyone cried out, “The emperor is not wearing any clothes at all!”

The emperor feels extremely embarrassed. He realizes that the crowd is telling the truth. He rushes back into his palace. The officials who are responsible have to run so fast in order to pretend holding the trains of clothes when actually no train to hold.