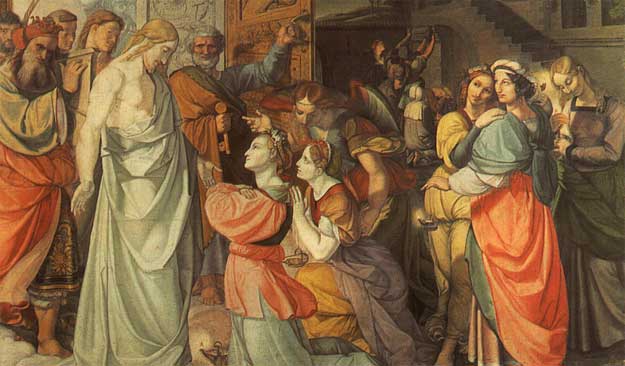 One day, Jesus told the people the story of the ten virgins.

Jesus said, “There are ten virgins who take their lamps to go out and meet their bridegroom.

In case the lamps go off during the night, five of the virgins took oil with them to refuel the lamp. But the other five virgins didn’t take any oil with them while waiting for the bridegrooms to arrive.

While waiting for the bridegrooms to come, the brides fell asleep.

Suddenly, someone cried out,’ The bridegroom has arrived.’ When the ten virgins heard it, they quickly awoke from their slumber and go out to meet the bridegroom.

On the way, the lamp of five of the virgins becomes dimmer and dimmer and is going off, so they says to the five virgins who took oil with them,’ Please gives us some of your oil because our lamps are going out.’

The five virgins who are wise says,’ Go out into the streets to buy oil for your lamps. The oil we have is just enough to keep our lamp burning.’

So, the five foolish virgins went out to buy oils for their lamps. But when they returned, they found the door is already shut.

The five foolish virgins knocks on the door and says,’ Lord, Lord, it’s us.’

Therefore you should always keep watch because you will never know when the son of Man will comes. The son of Man can come at anytime.”