You are here: Home / Children Bible Stories / Story of Jehu 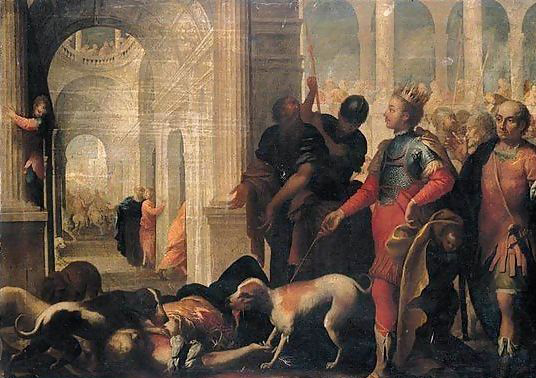 Ahab has seventy sons that lives in Samaria. Jehu wrote a letter to Samaria, saying, “If Ahab’s sons are with you now, get them ready to fight with me.”

When the people receive the message, they says to one another, “If King Joram and King Ahaziah couldn’t fight over Jehu, then how can we?”

The people replied Jehu’s message, “Tell us what you want us to do and we will obey you.”

Jehu sent another message, saying, “If you are for me, then chopped off the head of Ahab’s seventy sons and meet me at Jezreel at this time tomorrow.”

The people obeyed Jehu. They chopped off the head of Ahab’s seventy sons and put them in a basket. After that they sent it to Jezreel.

When the messenger came and told him that the people had killed all the king’s sons, Jehu says, “Put the heads of Ahab’s seventy sons in two heaps.”

The heads of Ahab’s seventy sons were laid in two heaps. Then Jehu stood in front of the people and he said, “You are good and have stand on my side. But the Lord commanded me to kill everyone in the household of Ahab in Jezreel therefore I will have to kill all of you as well.”

Jehu took his sword and killed everyone else left in the house of Ahab in Jezreel including Ahab’s friends, priests and his brave warriors.

After that, Jehu set out to Samaria. While he was there, Jehu met with King Ahaziah’s brothers and he asked them, “Who are you?”

Afterward, Jehu departed the place. On his way, he met Jehonadab and Jehonadab joined him in his chariot. Together, Jehu and Jehonadab went to Samaria and kill everyone else remained in the household of Ahab.

Then Jehu announced to the people, “King Ahab worship Baal a little but I worship Baal a lot. Gather everyone in Israel in the temple of Baal because I am going to offer a sacrifice to Baal. If anyone does not want to attend this sacred assembly, I will kill him.”

Jehu made this announcement because he already made plans to kill the believers of Baal.

The people of Israel who are worshippers of Baal assembled at the temple of Baal and Jehu made them wear a different vestment to mark them as Baal worshippers.

Jehu appointed 80 guards outside the temple of Baal so that whoever that tries to escape out of the temple will be killed.

After Jehu had offered the sacrifice at Baal’s temple, he said to the guards, “Go into the temple and kill all the Baal worshippers. Make sure no one escape.”

The guards took their swords and killed every Baal worshippers that wear the vest in the temple. After that they brought out the sacred pillars of Baal and burned them.

They also tore down the temple of Baal into rubble and it remains until today.

However, Jehu fell into the same sin of King Jeroboam by worshipping the golden calf.

The Lord says to Jehu, “You have obeyed me and kill everyone in King Ahab’s household. Therefore, I will let your sons be king of Israel until the fourth generation.”