You are here: Home / Children Bible Stories / Story of David and Bathsheba for Kids 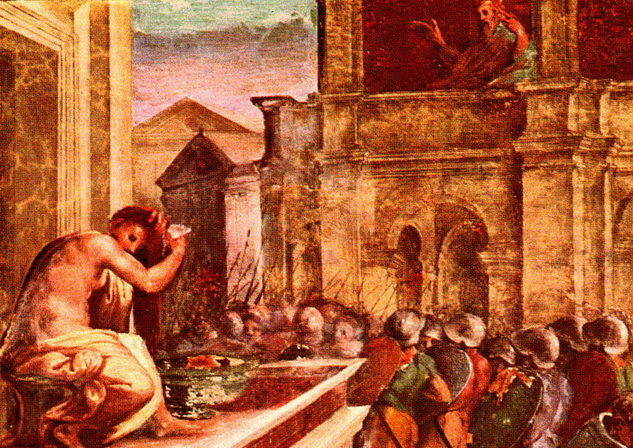 It was spring when all the kings go to war. David had sent out his entire army troop under Joab to conquer the city of Rabbah. David did not go with them; he stayed at Jerusalem.

One afternoon, David got up from his nap and went walking on his flat roof.

A very pretty woman named Bathsheba was bathing underneath. David saw her and lusted for her.

David sent his servant to find out who is that pretty woman.  The servant returned and told David, “Her name is Bathsheba. Bathsheba is the daughter of Eliam and wife of Uriah, the Hitite.”

Then David sent his servants to bring Bathsheba to her. David lay with Bathsheba and Bathsheba became conceived.

When Bathsheba found out that she is pregnant, she told David about it.

At that time, Uriah was fighting in the war so David sent a message to Joab to bring for Uriah to come to see him.

Joab sent Uriah to David and David asked him, “How is Joab? What about the war?”

That day, Uriah didn’t go home; he slept on the entrance to the king’s palace.

Uriah answered, “I was worried about the sacred chest and the soldiers that are still camping in the fields under the command of Joab so I didn’t go home to eat and sleep with my wife.”

David said, “Stay here today and you can go back tomorrow.”

Uriah stayed and David invited him for dinner. Uriah ate and drinks.Then he went out to sleep on his mat at the entrance to the palace.

The next day, David wrote a letter to Joab and has Uriah deliver it to Joab.

The letter says: Put Uriah on the front battle line so that Uriah will be wounded and die.”

When the men came out to fight, some of David’s soldiers along with Uriah were killed.

Joab sent a messenger to report everything that happened at the war.

The messenger also told David that Uriah was killed during the fight at the war.

When Bathsheba found out that Uriah, her husband was killed during the war, she mourned for him.

After that, David brought Bathsheba into his palace and Bathsheba became David’s wife and they had a son.

God was very angry that David killed Uriah so that he could have Bathsheba as his wife and he sent the prophet Nathan to speak to him.

Nathan came to David and tells him a story, “There lived a rich and poor man. The rich man has lots of cattle and sheep; but the poor man has only one lamb.

One day, the rich man had a guest that came visiting him. The rich man doesn’t want to slaughter his own cattle and lamb to serve meal for the guest.

Instead, he went and stole the lamb from the poor man. He slaughtered it and serves it as a meal instead to the guest.”

David grew angry and said to the prophet, Nathan, “Who is this rich man? I swear I would have him killed now!”

Nathan replied, “The rich man in the story is you. You murdered Uriah, the Hitite by letting the Ammonites kill him so that you could take his wife, Bathsheba to be your wife. Because you had done this, your family will never have peace. Someone from your family will cause you a lot of trouble.”

Every day, David would lie on the floor to beg God to heal his son.

He also didn’t eat and fasted every day. After the boy was sick for seven days, he died.

When David found out that his son is dead, he got up from the floor, combed his hair and get dressed.

After David worshipped the Lord, he had a meal. David comforted Bathsheba and they had another son, Solomon.

The prophet Nathan came to tell David that God loves Solomon very much call him, “Jedidiah”.