You are here: Home / Children Bible Stories / Story of Amnon and Tamar 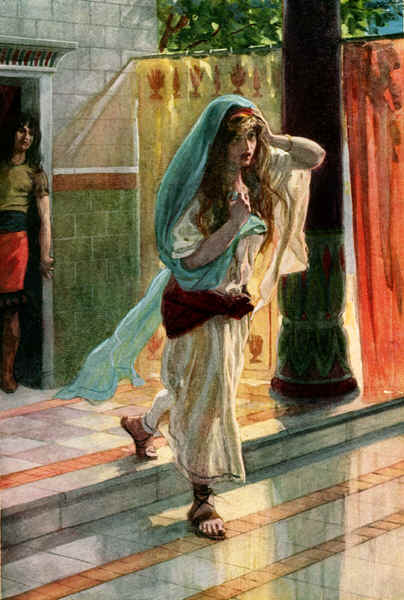 David had a beautiful daughter called Tamar. Tamar is the sister of Absalom and half sister of Amnon.

It happened that Amnon fell in love with his half sister, Tamar. Amnon wanted Tamar very much but he couldn’t think of a way to be with her alone.

Amnon had a friend named Jonadab who knows how to get everything he wanted.

Jonadab said to Amnon, “What is the problem? You are the king’s son and you should be able to get whatever you want easily.”

Amnon said, “I am in love with Tamar.”

Jonadab answered, “Go and lie down on your bed and pretend to be sick. When you father comes to see you, tell him to sent Tamar so that you can watch Tamar cooking food for you.”

Amnon went to lie down on his bed and pretend to be sick.

When David comes in to see Amnon, Amnon asked him to send Tamar to him.

So David sent his daughter, Tamar to Amnon’s bedroom.

When Tamar arrived, she made the dough and baked the bread for Amnon.

After that Tamar served the bread to Amnon but Amnon doesn’t want to eat.

After Amnon had sent the servants out, he said to Bathsheba, “Serve the bread in my bedroom.”

As Tamar was taking the bread over to Amnon, Amnon said to her, “Come and sleep with me!”

Amnon was stronger than Tamar so he overcame Tamar and raped her.

Then Amnon hated Tamar more than he loved her. Amnon said to his servants, “Throw this woman out!”

It is a custom that the king’s unmarried daughter wears long robes.

Tamar tore off his long robes and put ashes on her head.  Then she covered her face with her hands and wailed loudly as she walked away.