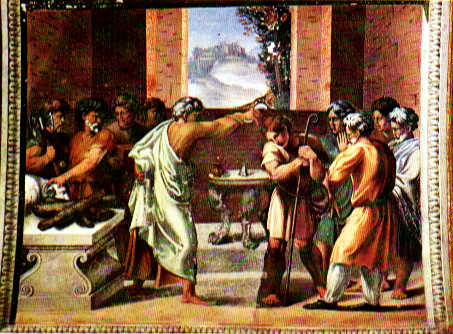 God felt sorry that He chose Saul to be king over Israel.

So God said to Samuel, “I don’t want Saul to be king anymore. Pour olive oil into a small container and go to the house of Jesse now. I had chosen one of Jesse’s sons to be king.”

Samuel replied, “If I do this, Saul will find out about it then he is going to kill me.”

God said, “Take a calf and pretend to offer a sacrifice to me. Then invite Jesse. I will tell you which one is my chosen king and you will pour olive oil on his head.”

Samuel obeyed God and went to Bethlehem to offer a sacrifice to Him.

When the town leaders of Bethlehem saw Samuel, they were afraid.

They asked Samuel, “Is this a friendly visit?”

Samuel replied, “Yes. I have come to offer sacrifices to God.

When Jesse and his seven sons arrived, Samuel saw the oldest son,Eliab and thought to himself, “This must be the Lord’s chosen king,”

But God said to Samuel, “Eliab is not the one. People judge a person from their outward appearance but I see what is in their heart.”

Jesse had all his seven sons went to Samuel but none of them God had chosen to be king.

Jesse answered, “Yes. I have another son. He is my youngest son. He is outside at the field looking after the sheep.”

David is a healthy and handsome boy.David’s eyes have sparkles.

David came in, and God said to Samuel, “He is the one. Pour olive oil on David’s head.”

Samuel poured olive oil on David’s head to anoint him.

At that moment, the Holy Spirit took control of David and he stays with him from then on.