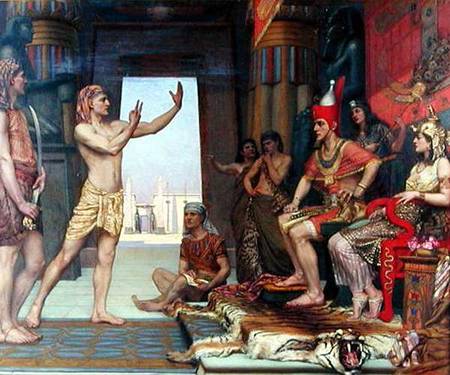 After that, Pharaoh was very troubled. Pharaoh called every wise man in Egypt to interpret his dreams but no one can understand the meaning of Pharaoh’s dreams.

The chief cupbearer said, “When I was in prison with the chief baker, I had a dream and man there called Joseph interpret our dream. It was just as he had said. I was restored to my position and the chief baker was hanged.”

Pharaoh quickly sends for Joseph in the prison. Pharaoh told Joseph about his dreams.

The dream means that there will be seven years of good harvest and seven years of famine. You dreamed the same dream twice because God confirmed that it is going to happen.

Now Pharaoh has to choose a wise man who will oversee all the land of Egypt. Pharaoh also should appoint officers in all over Egypt to collect one fifth of all grains and store them in the cities during the seven plentiful years so that Egypt will have food during the seven years of famine. ”

Pharaoh agreed with Joseph’s suggestion. Pharaoh then appoints Joseph as governor of Egypt. Pharaoh also gives the Asenath, the daughter of the chief priest Poti-Pherah priest of On as wife.

So Joseph started to collect one fifth of all the grains in Egypt and keep them in the storehouse. The grains were so much like the sands of the seashore.

The famine was so severe that there was no food in the land. So Joseph opened up the storehouse and started to sell the grains to the people.