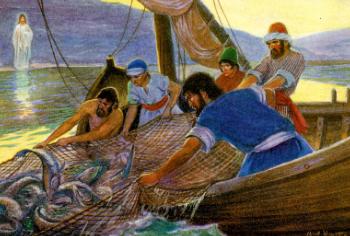 As Jesus came near the area of Caesarea Philippi, He asked Peter,”What do the people say I am?”

Then Jesus said, “But who do you think I am?”

Peter answered, “You are the Christ, the Messiah, the Son of God.”

Jesus said, “Blessed are you because My Father in Heaven has revealed this to you. I also say to you Peter, I will build My church on this foundation and the gates of the Hades will never overcome it. I will give you the keys of heaven so that whatever you bind on earth is bound on heaven; and whatever you loosed on earth is loosen in heaven.”

Then Jesus commanded His disciples to tell no one that He is the Christ.

Jesus began to tell His disciples that he must go to Jerusalem and be tortured by the elders of the Jews, chief priests, and scribes and die but he will be resurrected from the dead on the third day.

When Peter heard what Jesus said, He took Jesus aside and said, “Never Lord! It shall never happen to You!”

But Jesus turned to Peter and rebuked him, “Get away from me Satan! You had offended me because you do not have the mind of God but of men.”

Jesus said to His disciples, “If anyone wants to follow Me, He has to deny Himself and take up his cross to follow Me. This is because whoever who wants to save his life will lose it. But whoever who loses his life will gain life. At the end times, the Son of Man will come in His Father’s glory and reward everyone according to what they had done for Him.”