You are here: Home / Children Stories / Paul in Lystra 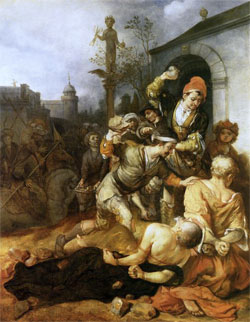 In Lystra, there once lived a crippled man who could not walk since he was born.

At that time, Paul happened to be in Lystra preaching the gospel of the Lord Jesus Christ to the people there. Barnabas was also there.
The crippled man heard the gospel that Paul preached. Paul saw that he has faith to be healed so he said, “Stand up with your two feet.”

The crippled man believed and he was healed. He stood up and started to jump.
When the people at Lystra saw what Paul had done that the crippled man could walk again, they thought Paul is the gods that have come down to them.

So they brought cattle, and garlands to the front of the city to offer a sacrifice before the people.
But when Paul and Barnabas heard about what the people think they are, they felt very upset and tore their clothes.
Paul and Barnabas cried out to the people, “People, we are just human. We are preaching to you that you should turn away from these worthless gods and come and worship the true living God who created the universe. God had left Himself good witness, for example, he sent down rain, and gave us four seasons, spring, summer, autumn and winter.”
But the Jews from Antioch and Iconium came and persuaded the people not to believe what Paul said.

Then the Jews stoned Paul. Thinking Paul was dead, they tugged him outside the city.

After the Jews had left, the disciples come to Paul and surrounded him and Paul got up and went into the city.

Paul and Barnabas departed to Derbe the next day.
After Paul had preached the gospel in Derbe, he went back to Lystra and strengthened the believers by encouraging them to continue in the faith.