You are here: Home / Children Stories / Paul and Circumcision 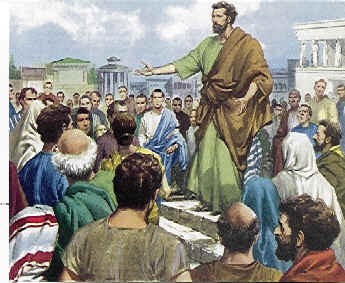 One time, a man from Judea came and told the Christians, “If you are not circumcised, you cannot be saved.”

When the Christians heard the message, they don’t know what to do.

They asked Paul and Barnabas to come to Jerusalem and solve the question.

So, Paul and Barnabas departed to Jerusalem.

On their way, they went through Phonecia and Samaria.

They reported to the people that many Gentiles had come to believe in the gospel of the Lord Jesus Christ and they praised God.

Some of the Pharisees stood up and said, “Every Christian must be circumcised in order to be saved and they should obey Moses’ law.”

There were so much quarreling. Then Paul stood up and said, “God made no difference between the Jews and the Gentiles but he purified their hearts by faith.

Therefore, why do you purposely trouble the Gentiles by asking them to be circumcised? We believe that everyone will be saved in the same manner through God’s grace.

We should not trouble the Gentiles who had accepted Jesus Christ to get circumcised.

But we will write a list of things that they should abstain yourself from including, things polluted by idols, things that are strangled, eating blood and sexual immorality.”

The whole church was very pleased with Paul’s answer.

So Paul wrote a letter concerning the things to be abstained from.

Then they sent two messengers, Judas and Silas to send the letter to the Gentiles.