You are here: Home / Children Bible Stories / Moses and Amalekites 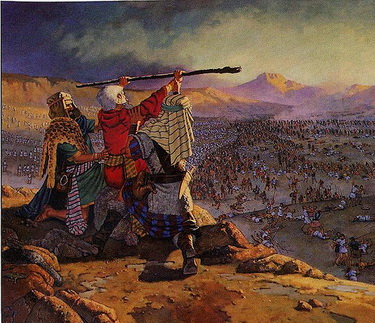 Moses said to Joshua, “Choose some of the men among us that are strong to fight with the Amalekites. Tomorrow, I will go up to the hill tomorrow with the staff of God in my hand.”

Joshua did what Moses told him to do. Joshua chose the strong men among them to fight with the Amalekites. Moses went up to the hill with Aaron, and Hur.

Moses was very tired and he held down his staff to rest for a while.

When they saw this, they quickly take a stone and put it under Moses so that Moses can sit down.

Then Aaron and Hur helped to support Moses’ hands holding the staff on both side.

This way, Moses’ hands were not held down until the sun had set. Joshua and the Israelites victoriously defeated the Amalekites with swords.

The Lord said to Moses, “Record this victorious event down and read it aloud in the presence of Joshua until I completely destroy the Amalekites.”

Moses obeyed God and he recorded it down and read it out in the hearing of Joshua.

Moses built an altar to the Lord. Moses called the altar, “The-Lord-Is-My-Banner.” This is because God swore that he will have war with all generation of the Amalekites.