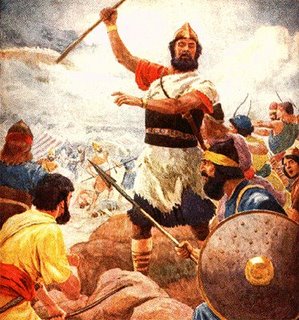 One day, Samuel said to Saul, “The Lord gives you this message, ‘When the Israelites come out of Egypt, they were attacked by the Amalekites. Now go and destroy the Amalekites along with all their possessions including the men and women, babies, sheep, cattle and donkeys. ’”

After Saul heard this message from Samuel, he sent messengers for the men to join his army troop at Telaim.

Then Saul led the army troop to a valley near a town of the Amalekites.

Some Kenites lived nearby. Saul doesn’t want to kill them so he asked them to leave the place. The Kenites left and evacuated the place.

Saul did not obeyed the Lord because he didn’t kill King Agag and held back some of the Amalekites’ livestock.

Someone told Samuel, “Saul had traveled to Carmel to build a monument to remember his victory. After that, Saul left for Gilgal.”

Samuel caught up with Saul. Saul said to Samuel, “I hope the Lord will bless me because I had done everything as you had said.”

Samuel answered, “Then why is there the voice of cattle and sheep?”

Saul explained, “I kept the best cattle and sheep so that I could offer them as sacrifices to the Lord at Gilgal.”

Samuel answered, “Why did you disobey the Lord? I told you to destroy every possession of the Amalekites. ”

Samuel answered, “Does God really want your sacrifices? All He wants is you to obey Him. God had decided that you cannot be king anymore because you had disobeyed Him.”

Saul said, “I am wrong. I had sinned against the Lord. Please forgive me and come to worship the Lord with me at Gilgal.”

Samuel answered, “No! You disobeyed the Lord and therefore the Lord had decided that you cannot be king anymore!”

Saul held on to the edge of Samuel’s garment and it tore.

Saul said, “I know I disobeyed the Lord. But please come and worship the Lord with me at Gilgal for the sake of the soldiers and the people of Israel.”

Samuel agreed to go back with Saul and he went with Saul to worship the Lord.

King Agag thought, “They surely won’t kill me!” But Samuel took a sword and chopped King Agag into pieces.

After that, Samuel went back home to Ramah; and Saul returned to Gibeah.

Although Samuel felt depressed about Saul, he never sees him again.