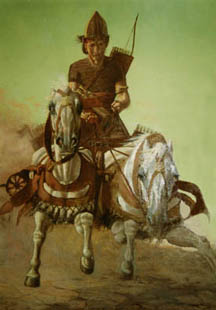 One day, Elisha called in a young prophet and says to him, “Take this bottle of olive oil with you. Go to Jehu in the town of Ramoth in Gilead now. When you found Jehu, take Jehu to a private place. Pour the olive oil on Jehu and says to him, ‘The Lord has make you king of Israel.’”

Jehu asks, “Which one of us you are referring to?”

The young prophet answered, “I have a message for you, sir.”

Jehu arose from his seat and went out from the meeting place to a private place with the young prophet.

Then the young prophet says to Jehu, “God has chosen you to be king of Israel. God wants to destroy the family of King Ahab and Jezebel because they kill God’s prophets and His servants. God commands you to kill every person in King Ahab’s household. Jezebel will be murdered and her body will be eaten by dog until there won’t be enough left to bury her.”

After the young prophet finished speaking, he quickly opens the door and ran out.

Jehu went back to the meeting place. One of the army officers asked Jehu, “What did that mad prophet tells you?”

Jehu answered. “He says that God had chosen me to be king of Israel.”

The army officers took off their cloak and spread them out at where Jehu is standing and says, “Jehu is now king of Israel!”

King Joram was recovering from his wound at Jezreel after fighting against King Hazael. King Ahaziah was with King Joram because he is paying him a visit.

At this time, Jehu was discussing with his army officers how he can kill King Joram. After that, Jehu rode in his chariot and set out for Jezreel.

Jehu replied, “What do you care? Get behind me and my army.”

The guard in the watchtower saw that the rider didn’t return and said to King Joram, “The rider rode out to meet the men but he didn’t come back.”

So King Joram sent out a second rider.

The second rider asked Jehu, “Is this a friendly visit?”

Jehu answered, “Just get behind me and my army.”

King Joram decided to ride his chariot out and meets Jehu and his men himself.

King Joram asked Jehu, “Jehu, is this a friendly visit?”

Jehu answered, “How can this be a friendly visit when your mother Jezebel causes the people of Israel to practice idolatry and witchcraft.”

King Joram shouted to King Ahaziah, “Ahaziah, we must leave this place quickly! This is a trick.”

King Joram said to his army officers, “Throw King Joram’s body into the field that Naboth once owned because God promised me that King Ahab will be punished in the same field where he had killed Naboth and his sons.”

When King Ahaziah saw these, he tried to escape but one of Jehu’s armies shot him and he fell down dead too.