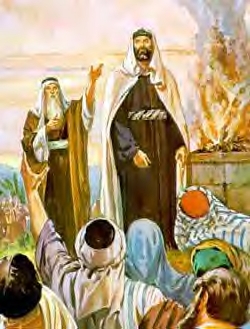 Samuel had two sons whose names are Joel and Abijah.

Joel and Abijah did not follow the good examples of their father, Samuel because they accept bribes to make unfair decisions.

One day, the people of Israelites said to Samuel, “You are already an old man. Your sons did not follow your good example and had accepted bribery to make unfair decisions. Choose a king for us!”

Samuel felt disappointed that the Israelite does not want to listen to God.

Samuel cried out to the Lord and the Lord answered him saying, “Do what the people tell you to do. I will let you know which person should be chosen to be their king. But warn them what it will be like when a king will rule them.”

Samuel said to the people, “If you let a king to rule over the Israelites, this is how it will be.

The king will force your daughters to make perfume for him, and cook for him.

The king will take away your best fields and olive orchards and give it away to his officials.

The king will take a tenth of your crops and give it to his officials.

The king will take away your best slaves and donkeys to work for him.

The king will take a tenth of your sheep and goats.

He will also make you his slave.

You will finally cried out in prayers to the Lord and beg Him to save you from the king.

God will not answer your prayers because he had already warned you about having a king.”

The people shouted to Samuel, “We don’t care! We want a king to rule over us just like other nations!”

The Lord said to Samuel, “Listen to the people and give them what they want. Give them a king.”

Then Samuel sent the Israelites back to their home.