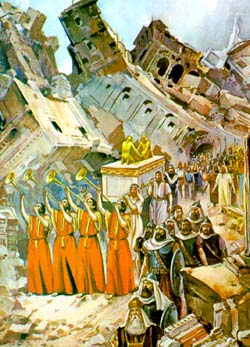 God said to Joshua,” Tell the priests to carry the tabernacle into the Jordan River.

When they have reach the edge of the Jordan River, give command for them to stand still in the river so that the water in the Jordan will stop flowing and stand as a heap and the Israelites may cross it.”

So it was Joshua commanded the priests to carry the tabernacle of the covenant into the Jordan.

Once the priests stepped into the edge of the Jordan River, the water was cut off and it piled up as a heap.

The priests bore the tabernacles and stood still in the Jordan River until all the people had crossed the river to the other side.

Then God said to Joshua, “Choose twelve men from the twelve tribes of Israel and have them go into the river to collect a stone that it may serve as a memorial to the children of Israel.”

So Joshua chose twelve men from the twelve tribes of Israel and commanded them to take a stone from the Jordan River.

The twelve men did as Joshua said. They went into the Jordan River and carried a stone back to their camp.

One day, Joshua was by the city of Jericho when he saw a man that stood opposite of him with a sword. Joshua asked him, “Are you for us or our enemies?”

The man said, “I am the Commander of the army of the Lord and have come.”

Joshua bowed down to worship Him. Joshua said, “What is it that the Lord wants to say to His servant?”

The man said, “Take off your sandals for the place where you are standing is holy.”

Joshua obeyed and took off his sandals.

Then the Commander of the Lord’s army said, “Jericho is shut up because they know the Israelites are coming to attack them. I have given Jericho into your hand.

Now you and all fighting warrior men shall march around the city once every day for six days.

The priests that carry the tabernacle of the covenant will march ahead of you.

But on the seventh day, you shall march around Jericho seven times and the priests will blow the trumpets.

When you heard the loud blasts of the trumpets, everyone must let out a great shout and the walls of Jericho will collapse. And then you can go into the city to attack them.”

So Joshua spoke to the people about it. Every day, Joshua and the fighting warrior men will march around the city once.

The priests who bore the tabernacle of covenant marched ahead of them.

Then on the seventh day, they marched around the city of Jericho seven times and the priests let out a loud trumpet blast andJoshua said, “Shout for the Lord for He has given into your hand the city!”

When the people heard the loud trumpet blast, they gave out a loud shout and the walls of Jericho fell down flat.

The men went in and kill everyone in the city and then they burned down the city into ashes.

They took the silver and gold, and vessels of bronze and iron and consecrated to the Lord.

Everyone in the city was killed except Rahab, the prostitute and her family household who stayed in Rahab’s house.