You are here: Home / Children Bible Stories / Joseph and His Brothers Story 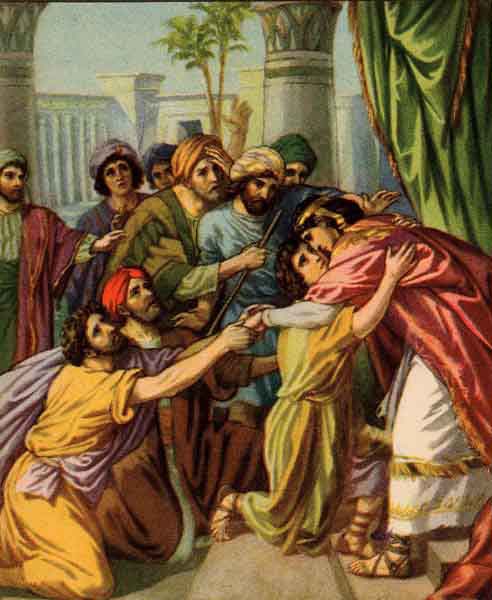 The famine affected every country in the world and people came to Egypt to buy grain.

When Jacob saw that there was grain in Egypt, he told his son to go to Egypt to buy grain.

Joseph’s ten brothers went to Egypt to buy grain. The youngest son of Jacob, Benjamin did not go with them because Jacob was afraid that something bad will happen to Benjamin.

Joseph was the governor of Egypt and he was in charge of selling grains to all the people.

When Joseph’s brothers saw Joseph, they didn’t recognize him. Joseph saw them and immediately knows they were his brothers.

Joseph pretended not to know his brothers.

Joseph said, “Where do you come from?”

Joseph’s brothers answered, “We came from Canaan to Egypt to buy grains.”

Joseph said, “No! You have come to Egypt to spy on our land.”

Joseph’s brothers said, “We are not spies! We are twelve brothers of a father who lives in Canaan. One is at home with our father and the other one is no more.”

Joseph denied their excuses. Joseph demanded that they bring their youngest brother, Benjamin to him but until then, he will take one of them as prisoner.

Reuben said to his brothers, “Did I not tell you not to harm the boy? Now, Joseph’s blood is calling out for revenge against us.”

Joseph heard what Reuben said, and he turned away to cry. Then he took Simeon, and bound him before his brothers.

Joseph told his servants to fill their sack with grains along with each one’s money for the grains.

During the journey, Joseph’s brothers stopped to rest. As each man opened their sack to give grain for their donkeys to eat, each man found their money in the sack.

Then Joseph’s brothers return to Canaan and told their father all about it.

They told Jacob that if they were to return to Egypt to buy grains, they will have to take Benjamin along.

Jacob denied their request and will not let Benjamin go with them.

Then Reuben spoke up, “Let Benjamin travel with us to Egypt. If Benjamin did not come back to you, you can kill both of my sons.”

But Jacob still would not let Benjamin go to Egypt because he don’t want lose Benjamin like he lose Joseph.

Once again, there is no more food left and Jacob told his sons to go to Egypt to buy grains.

Jacob told his sons to bring balm, honey, spices and myrrh, pistachio nuts and almonds as gifts to Joseph.

Jacob also told his sons to take double portion of money with them because of the incident last time.

When Joseph’s brothers arrived at Egypt, Joseph asked his servants to bring them to his house to have dinner.

Then Joseph free Simeon and gave back him to them. Joseph’s brother brought out the gifts for Joseph and passed it to his steward so that he may pass it to Joseph.

Joseph asked his brothers about their father well being. When Joseph saw Benjamin, he went to his room and cried for a while. Then he washed his face and came out to eat a meal with his brothers.

Joseph then served food for all his brothers but he gave Benjamin 5 times more food than the other brothers. So they ate and drank and were very happy.

When daybreak, Joseph’s brothers went on their journey back home.

After they are gone, Joseph commanded his steward to chase after his brothers and said to them, “Why have you repaid good with evil? Why did you steal Joseph’s silver cup that Joseph uses to practice magic?”

So the steward overtook Joseph’s brothers. He found Joseph’s silver cup in Benjamin’s sack and they all went back as hostages to Egypt.

When Joseph’s brothers saw Joseph, they were very afraid and bow down before Joseph. Then Joseph revealed to his brothers that he is Joseph, their brother whom they sold as slave to the Ishmaelites.

It happened that rumor about Joseph’s brothers was spread to Pharaoh.

Pharaoh then commanded Joseph to tell his brothers and father to come down to Egypt and live in Goshen.

Then Joseph gave them carts to carry Jacob who was very old now and the children to Egypt.

Joseph also give his brothers 10 donkeys with Egypt’s fine products, and 10 female donkeys that are loaded with grain, bread, as well as food for his father for the journey.