You are here: Home / Children Bible Stories / Jesus and the Woman Taken in Adultery 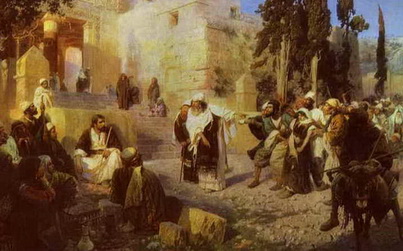 One morning, Jesus went into the temple as usual. Jesus sat down and began to teach the people who came to Him. Then the Pharisees brought a woman that had committed adultery to Him.

They said to Jesus, “Teacher, this woman had slept with another man and committed adultery. According to the Law of Moses, we must have this woman stoned to death. But what do you say we should do?”

They said this to Jesus because they want to test Him.

Jesus was writing on the ground with His finger and He didn’t care about what He said to Him.

When they keep asking Jesus the same question, Jesus finally lifted up his head and said to them, “If anyone of you never sin before, you can stone the woman first.” Then Jesus continued to write on the ground.

The Pharisees were guilty of their sins and they left Jesus one by one beginning with the oldest to the youngest ones.

When Jesus saw that everyone had left, He said to the woman who was taken in adultery, “Where are the people that accused you? Didn’t anyone condemn you?”

The woman who was taken in adultery replied, “Everyone had left. No one had condemned me.”

Then Jesus said, “Your sins had been forgiven. Go now and don’t sin anymore.”

Jesus spoke to the people and say, “I am the light of the world. Whoever that follows Me will have eternal life.”

When the Pharisees saw this, they said to Him, “You bear testimony to your own words therefore it is not true.”

Then they said to Jesus, “Who is your Father?”

Jesus said these while he was at the treasury but no one do anything to Jesus because it was not yet the right time for Jesus to be arrested.