You are here: Home / Children Bible Stories / Jesus Nailed to the Cross 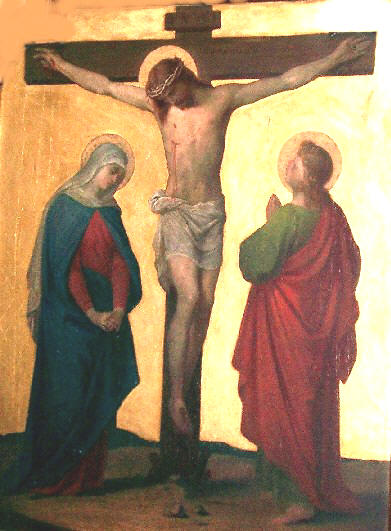 The soldiers mocked Jesus, by stripping off his clothes and putting a scarlet robe on Him.

They made a crown of thorns and made Jesus wore it on his head. They also put a reed in Jesus’ right hand.

The soldiers made fun of Jesus and bowed down to Him, saying, “Hail, the King of Jews!”

Then the soldiers spat saliva on Jesus and took off the scarlet robe they put on Him.

After that, the soldiers took Jesus to the Place of Skull called Golgotha so that they can crucify Him.

Along the way, a man named Simon appeared. So they made Simon carry the cross on which Jesus will be crucified.

When they reached the Place of Skull called Golgotha, they gave Jesus some sour wine to drink.

After that, they nailed Jesus to the cross. They took away Jesus’ garments and divided His garments and then they cast lots among themselves.

There was a description on top of the cross which Jesus was crucified which is: KING OF THE JEWS.

Besides Jesus, two robbers were also crucified along with Jesus.

As the people passed by, they shook their heads and said, “If you say you can destroy the temple and built it up again in three days, come down from the cross and save yourself now.”

From 6 o’clock to 9 o’clock, there was darkness all over the land. Jesus cried out in a loud voice, saying, ” My God, my God, why hast thou forsaken me.” (King James Version. Matthew 27:46)

A soldier ran and filled a sponge with vinegar and let Jesus drink it.

After Jesus tasted the vinegar, He cried out in a loud voice, saying, “I committed my Spirit into your hand, Father.” Then Jesus died.

At the very moment, the curtains of the temple were torn into two.

The earth shook violently and the rock split.

When the people saw the earth shook violently and the curtains torn into two, they said among them, “This must be the Son of God.”

A man named Joseph from Arimathea went to Pilate and asked him for the body of Jesus.

Pilate gave permission and Joseph wrapped Jesus in a linen cloth and laid Him in a tomb that he had hewn out himself.