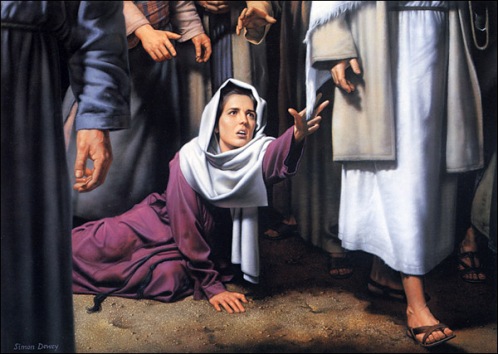 A ruler of the synagogue whom daughter had just died came to Jesus.

The ruler worshipped Jesus and said, “My daughter is dead. Please come and lay your hand on her so that she may be alive.”

Jesus quickly arose with His disciples and went along with the ruler to his house.
A woman who has been bleeding for twelve years saw Jesus and said to herself, “If I could just touch the edge of Jesus’ garment, I will be healed completely from this bleeding.”

So the woman went and touched the hem of Jesus’ garment and she was instantly made well.
Jesus felt that power had gone out of Him and He said, “Who touched Me?”

The woman was very afraid, and knowing that she was healed, she fell down before Jesus and told Him the whole truth.

Jesus said to the woman, “Be of good cheers, daughter. Your faith had made you well.”
When Jesus and his disciples reached the ruler of the synagogue’s house, the crowd was very noisy.

There was a great commotion of people weeping and playing flutes because the girl is dead.
Jesus said to them, “The girl is not dead but she is sleeping.”
Jesus put everyone outside of the house but He took the girl’s father and mother and His three disciples, Peter, James and John with him into the house.

Jesus took the girl by the hand and said,”Talita, cumi” which means, “Little girl, get up.”

The girl woke up and she was well. Then Jesus commanded the girl’s father and mother to give her some food to eat. The girl was twelve years old.