You are here: Home / Children Stories / Jesus Healing on the Sabbath 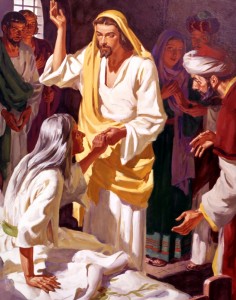 Jesus goes to the synagogue to teach every day.

There was a woman at the synagogue that could not stand straight for eighteen years.

The woman’s back was bending and couldn’t stand straight because there was a spirit of infirmity that is oppressing her.

When Jesus saw the woman, he called her to Him.

He said, “You are freed from your infirmity.”

Then Jesus reached out his hand and touched her. The spirit of infirmity left the woman and she was immediately healed. The woman can stand straight and she praised God about it.

They said to the crowd, “There are six days in each week that you can come and be healed by Jesus but not on Sunday. This is because no one is allowed to work on the Sabbath day.”

Jesus answered them by saying, “Didn’t you untie your donkey and cattle and lead them to drink water on the Sabbath. So why this woman who was bound by Satan for eighteen years not be freed from her bondage?”

The crowd rejoiced for all the miracles that Jesus did and put shame to the rulers of the synagogue who accused Jesus.