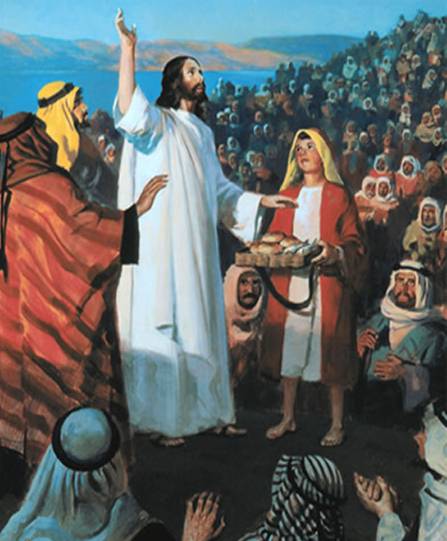 At one time, a great crowd followed Jesus for three whole days and nights. The people haven’t eaten anything and they were very hungry.

Jesus called His disciples to Him, and said, “I have compassion on these people who had been with me for three days. I don’t want to send them away empty stomach. If I send them away, they will pass out on the way back to their home because some of them live very far away from here.”

His disciples answered, “Where can we buy so many bread to feed such a great crowd of people?”

Jesus asked them, “How many loaves of bread do you have with you?”

The disciples answered, “We still have seven loaves of bread and few small fishes left with us.”

Jesus made the people sat down in rows. He took the bread and the few small fishes and gave thanks to God for them.

After He had blessed the food, He gave it to His disciples. The disciples then distributed the seven loaves of bread and the few small fishes among the people.

The people ate all they wanted and felt very full.

The number of people that had eaten the bread and fish were 4000 not including the women and children.

After that, Jesus sent the multitude away. He climbed into a boat and sailed across to the other side of the lake with His disciples.