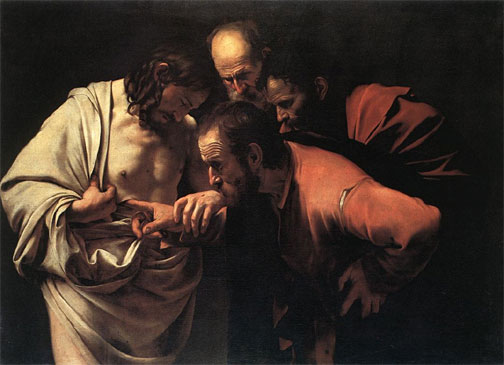 It happened that two disciples of Jesus were on their way to Emmaus.

On the way, they discussed about all the things that had happened to Jesus and asked questions among themselves.

While they were still talking, Jesus appeared and walked along with them. The disciples couldn’t recognize Jesus and so they didn’t notice him.

Jesus said to them, “What are you both talking about?”

They replied, “We were discussing about all the things which happened to Jesus of Nazareth who was a great prophet before God and mighty in deeds and how the chief priests and the people sentenced Him to death and crucified Him on the cross. We are hoping that He is the Savior who will redeem our sins. Some of the women among us went to the tomb and did not find the body of Jesus there. They saw a host of angels who told them that Jesus is already raised from the dead.”

Then Jesus said to them, “Why are you so slow to believe? Didn’t Moses and all the prophets already explain it in the Scripture that Jesus Christ, the son of God will be crucified on the cross and raised on the third day.”

Jesus pointed out the scriptures and explained to them. Then He left them.

At evening on the same day, when all the doors were shut, Jesus suddenly appeared among the ten disciples.

He said to the disciples, “Peace be with you”. The disciples immediately recognize he is Jesus. At first, they have doubt.

But Jesus said, “Touch my hand and my feet. It is flesh and not spirit because a spirit doesn’t have flesh and bones.”

The disciples touched Jesus hands and side. However, some of them still does not believe, so Jesus took a broiled fish and ate it before them.

At that time, Thomas was not among the disciples.

The other disciples said to Thomas, “We have seen the Lord Jesus Christ.” Thomas did not believe them.

He said, “Unless I put my finger through the nail wound on Jesus’ hand, I won’t believe.”

After eight days, the disciples were assembled inside the house again. All the doors were shut. All of a sudden, Jesus appeared among the eleven disciples. This time Thomas was there too.

Jesus said, “Peace to you!”

Then He said to Thomas, “Reach out your finger and put through the hole of the nail wound on my hand. Do not be doubtful and believe.”

Thomas put his finger through the nail wound of Jesus and he said, “I believe.”

Jesus said to him, “Blessed are the one who have never seen and yet believe.”