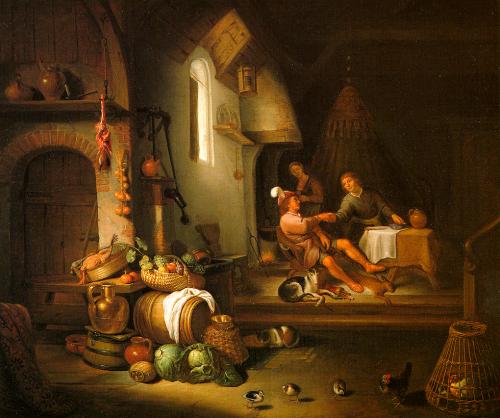 Rebecca was barren and Isaac prayed to the Lord so that they can have children. The Lord listened to Isaac’s prayer and Rebecca became pregnant.

Before Rebecca gives birth, the babies jostled in Rebecca’s womb. Rebecca was worried and asked God about it.

God told Rebecca that she is pregnant with twins of which the older will serves the younger.

When the time came for Rebecca to give birth, the first baby came out and it was red and hairy so they called him Esau; the second baby came out with his hand holding on to Esau’s heel so they named him Jacob.

Isaac was sixty years old when Rebecca bore him Esau and Jacob.

Esau is a wild man and loved the outdoors. Esau grew up to be a skillful hunter. Jacob is a docile man and love to stays at home in his tents.

Isaac loves Esau more because he loves the tasty wild game that Esau cooks for him. But Rebecca loves Jacob more.

One day, Jacob was cooking a stew. Esau just came back from hunting and was very tired and thirsty.

Esau said, “Give me some of the red stew you are cooking because I am weary.”

Jacob said, “I will give you the red stew if you sell your birthright to me.” So Esau makes an oath to give his birthright to Jacob.

Then Jacob gave Esau some bread and the lentil stew. Esau ate and drank and went on his way. Esau looks down on his birthright.