You are here: Home / Animal Stories / Frog and the Ox 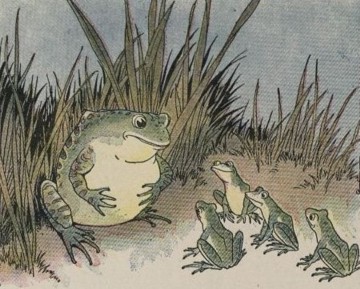 One day, a tiny frog says to his father, “Father, I saw a huge monster beside the pool today. It was as huge as the mountains, with two horns, a long tail and hoofs in its four legs.”

The father frog says, “That is only an ox. It couldn’t be so huge like the mountain. He is a bit bigger than me but I can make myself as big as him.”

Right after the father frog finish speaking, he puff up his stomach to make himself bigger. The father frog asks, “Is the ox as big as me now?”

The father frog sucks in more air and blew himself bigger so that he swells much more bigger this time. Then he asks the small frog, “Is the ox as big as I am now?” At this very moment, the father frog burst and his intestines flew out.

Self arrogance will lead to self destruction.