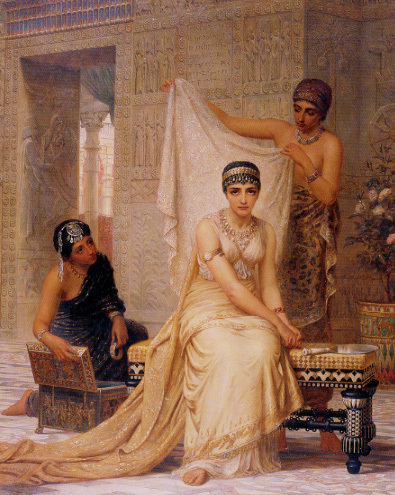 A long long time ago, there was a king named King Xerxes. King Xerxes’ kingdom covered 127 provinces from India to Ethiopia.

One day, King Xerxes held a big party at the beautiful palace garden. King Xerxes was a very generous king. He invited everyone to the party.

While King Xerxes was giving a party to the men, Queen Vashti also gives a party and invited all the women in the city to be present in the party.

King Xerxes wanted everyone to see how beautiful Queen Vashti is. He sent his servant to tell Queen Vashti to wear her crown and come to him to show the people her beauty.

They said to King Xerxes, “If Queen Vashti refused to come to you, you should divorce her. This is because when all the women in your kingdom heard what Queen Vashti had done, they will also follow her examples and refused to obey their husband.”

King Xerxes listened to the advice of his advisors and he divorced Queen Vashti.

After a while, King Xerxes was calmed down and not angry anymore about what Queen Vashti had done but he still keep thinking of it and the law that was issued because of her.

Then the king’s servant said, “Your Majesty, a search must be made to all the beautiful young women. You should choose Hegai to be in charged of them as well as making sure the women receive appropriate beauty treatment. ”

At that time, there was a Jew called Mordecai who lives the city of Susa.

When King Xerxes orders that all beautiful women be brought to the king’s palace, Esther was brought along with them too.

Esther’s turn to go to King Xerxes came during the seventh year of King Xerxes’ reign.

Esther pleased King Xerxes more than any of the other young woman, This made King Xerxes fell in love with Esther immediately and he married her.

Mordecai worked as a palace official for King Xerxes. Mordecai warned Esther not tell anyone that she is a Jew; and she obeyed him.

Bigthana and Teresh were two King Xerxes’ guards. They got angry with King Xerxes and plotted to kill him.

Mordecai found out about it and reported it to King Xerxes. King Xerxes then hanged the two men. King Xerxes had all these written down in his record book.

After this, King Xerxes promoted Haman to the highest palace official.

When they asked Mordecai why he refuses to bow down to Haman, Mordecai replied, “Because I am a Jew.”

They advised Mordecai to bow down to Haman but Mordecai won’t listen to them. So they reported it to Haman.

When Haman found out that Mordecai is a Jew, he decided to kill every Jew in the city.

Haman went to King Xerxes and said, “Your Majesty, the Jews who lives in your kingdoms have different customs than us and refuse to obey the law you had give. Why not give out a law that all the Jews will be killed.”

Haman had the secretaries to write the letter concerning the law and then have them send to every province.  The letter is written in the king’s name and sealed with the king’s ring.

When Mordecai heard about the news, he got very sad. He tore his clothes and wear sackcloth instead.

When Esther’s servants told Esther what Mordecai is doing, Queen Esther sent her servant to ask Mordecai why he is felling so sad.

Mordecai told the servant everything about it as well as the amount of money that Haman promised to add to the treasury if the Jews are killed.

Mordecai gave the servant a copy of the order. The servant showed it to Queen Esther. Esther said, “No one can go into the king without the king’s permission. Anyone who go in to see the king without being invited will be killed.”

Mordecai sent back a message to Esther, “Don’t think you and your family will be saved. We will somehow get some help if you don’t want to help us. It could be that God raised you up to be the queen at this very moment.”

Mordecai listened to Esther and did everything she told him to do.

After three days, Queen Esther went to King Xerxes in her royal robe.

When Queen Esther comes in, she touch the edge of the scepter.

Then King Xerxes said, “Esther, what can I do for you? I will give you as much as half of your kingdom.”

Queen Esther answered, “Your Majesty, I want you and Haman tocome to a dinner which I prepare tomorrow.”

King Xerxes and Haman went to Esther’s dinner. While they were drinking wine, King Xerxes asked, “Esther, what can I do for you?”

Esther answered, “Your Majesty, please come with Haman to the dinner I will prepare for you tomorrow. At that time, I will let you know what I want.”

The king and Haman went to Queen Esther’s dinner again the next day.

While they were dining, King Xerxes asked. “Esther, what do you want me to do for you?”

Queen Esther answered, “Your Majesty, if you really love me, please save my people. A reward had been ordered for whoever that will kills my people.”

King Xerxes said, “Who would do such a wicked thing?”
Queen Esther answered, “Haman.”

Haman was terrified when he look at Queen Esther and King Xerxes eyes, King Xerxes is so angry, he rose up from his seat and went into the palace gardens.

When King Xerxes came in, Haman was kneeling on the floor beside Queen Esther who is lying down on a couch.

King Xerxes said, “Now you want to rape my queen!”

As soon as he said this, Haman’s head was covered. Harbona said to King Xerxes, “ Your Majesty, Haman built a 75 feet high tower to hang Mordecai. Mordecai spoke up to saved your life from Bigthana and Teresh.”

King Xerxes said, “Hang Haman from the 75 feet tower that he had built!” Immediately, Haman was hanged from his own tower.

King Xerxes gave Queen Esther all the possessions of Haman.

Queen Esther knelt down before King Xerxes saying, “Your Majesty, if you really love me, please stop Haman’s plan to kill the Jews!”

King Xerxes answered, “I now give you a permission to make a new law to save your people. You can use my ring to seal the law so that the law will be permanent.”

On the 23rd of Sivan, the third month, the king secretaries wrote the law and distribute it among the Jews, and the governors of 127 provinces from India to Ethiopia.

The law gave the Jews permission to kill the people who want to take their lives on the 13th of Adar, the twelfth month.

On the 13th of Adar, the Jews took their swords and kill all their enemies. Five hundred people were killed that day; Haman’s ten sons were also among the ones killed.

King Xerxes have the bodies of the sons of Haman hung in Susa at the request of Queen Esther.

On the 14th of Adar, the Jews kill another 300 more of their enemies then they held a big feast.

That is why the Jews celebrate on the 14th of the month.

The celebration is called Purim. Purim is a day for the Jews to feast and exchange food with each other.