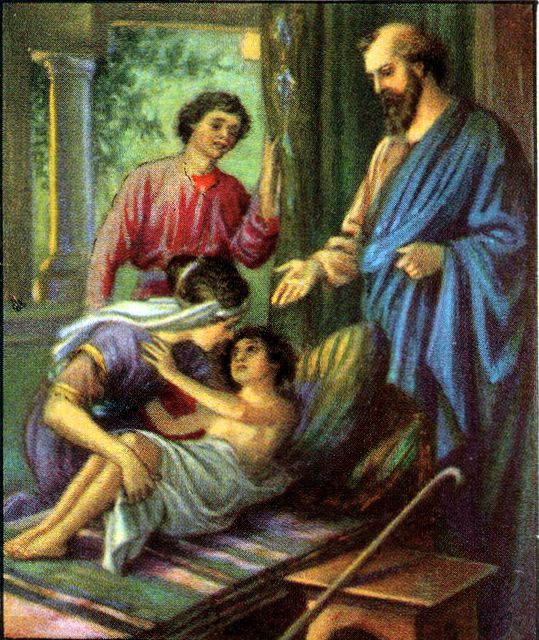 In Shunem, there lived a rich woman with her husband.

Whenever Elisha visits the place, he would go and have a meal at the house of the rich woman.

Sometime later, the rich woman said to her husband, “I am sure the man that often come and eat with us is a prophet. Let us put up a bed on our flat roof so that whenever Elisha comes, he can go up and spend the night there.”

The next time Elisha come to Shunem, he stopped by at the house of the rich woman and go up to the flat roof to rest.

Elisha said to his servant, Gehazi, “The woman is very nice to me. Is there anything that she wants that I can help her with?”

Gehazi answered, “She doesn’t have any son.”

Elisha said to Gehazi, “Go and tell her to come and stand at the entrance to my room.”

The rich woman came and stand at the entrance to Elisha’s room.

Elisha said to her, “Next year at this time, you will have a son.”

A few month s later, the rich woman became pregnant and she gave birth to a son.

One day, the boy was playing at the field when all of the sudden, the boy shouted, “Ouch! My head hurts so bad!”

The boy lay on the lap of her mother until noon and he died. The rich woman left the room and shut the door behind him.

Then she said to her husband, “Let me ride one of your donkey. Please let me take along a servant so that I can return as soon as possible.”

The rich woman rode the donkey and came to Elisha. She said to Elisha, “My son is dead. Please come and make him alive again.”

Elisha said to Gehazi, “Taking my walking stick and lay it on the boy. Remember don’t stop to talk to anyone.”

But the rich woman held on the Elisha’s garment,” I won’t leave you alone unless you go with me.” So Elisha went with them.

On the way, Gehazi ran back and told Elisha, “The boy didn’t wake up even after I put your walking stick on him.”

When Elisha arrived at the room of the boy, he laid his body on the boy with his eyes on the boy’s eyes and his mouth on the boy’s mouth.

As Elisha laid his body on the boy, the boy’s body becomes warm. Then he walked back and forth in the room.

After that, Elisha went back and lay on the boy again. The boy sneezed seven times, and he opened his eyes. Elisha showed the boy to his mother.

The mother of the boy bowed down and picked up her son. Then she left.