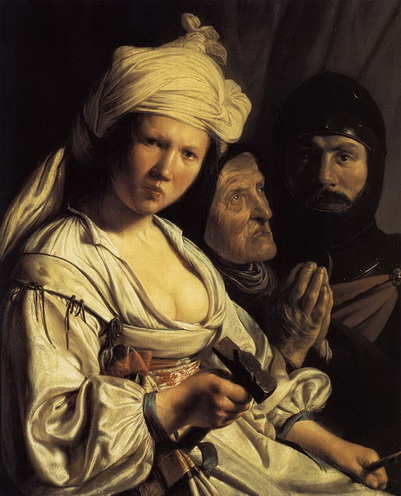 After Ehud had passed away, the Israelites disobeyed the Lord again by worshiping idols.

So the Lord let King Jabin of Canaan overcome the Israelites. King

Jabin ruled Canaan from Hazor. The people of Israel cried out to the Lord and the Lord heard their prayers.

King Jabin had 900 iron chariots and he oppressed the Israelites for 20 years.

There was a wise woman prophet, called Deborah. Deborah always sits under the palm tree of Deborah to judge the matters brought to her by the people of Israel.

One day, Deborah called for Barak because she had a message from the Lord for him.

Deborah said to Barak, “God had commanded you to take 10,000 men from the tribe of Naphtali and Zebulun to attack King Jabin with his iron chariots. Go bravely because the Lord will deliver King Jabin and his armies into your hand.”

But Barak said to her, “I will not go unless you go with me.”

So she said, “All right, I will go with you but the Lord will gives the glory of the victory over Sisera to a woman.”

Barak went to Mount Tabor and gathered ten thousand men from the tribe of Naphtali and Zebulun.

Then they went to attack Sisera and his iron chariots army. With the help of God, Barak and his army defeated Sisera’s army with sword.

Only Sisera is left. Sisera ran way to escape from Barak. Sisera came to the tent of Jael.

Jael welcomed Sisera into her tent. She covered Sisera with a blanket and gave him some milk to drink.

When Sisera had fell asleep, he drew a tent peg through the skull of Sisera with a hammer and Sisera died.

When Barak came to the tent of Jael, Jael showed him the dead corpse of Sisera.

That very day, Barak and his army overcome the kingdom of King Jabin of Canaan.