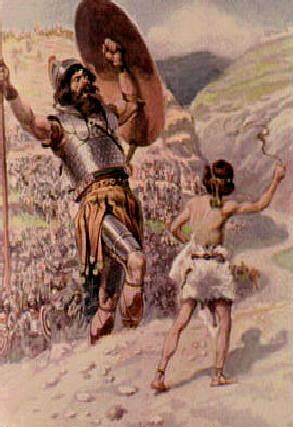 One day, the Philistines were getting ready to fight with the Israelites.

Saul and his army troop set up camps on a hill opposite of where the Philistines army set up their camps.

At that time, the Philistines had a hero who is a giant called Goliath.

Goliath came from the town of Gath.Goliath is 9 feet tall.

Goliath always wears a bronze helmet, and bronze armor to protect his chest and legs. Goliath carries a sword which he always strapped at his back as well as a large spear.

Goliath came out and challenged the Israelites army to fight with him everyday.

David’s brothers was also fighting in the Israelites army so Jesse called in David and said to him, “Take this sack of roasted grain and ten loaves of bread to your brothers. Here are 10 large cheeses to take to the commanding officer as gift. Go and see if all is well with your brothers who are at Elah Valley now.”

David obeyed his father. Early the next morning, he woke up and loaded a sack of roasted grain, ten loaves of bread.

After David had left the supplies with the man in charged, he ran up to the battle line to talk to his brothers to see if everyone is well with them.

While David was talking to his brothers, Goliath came out again and showed off to them. The Israelite armies were afraid of Goliath the giant and they backed off.

The Israelite armies said to one another, “Look how Goliath keep coming out to boast and insult us. The king will give a huge reward to the man who kills Goliath; the king will also give his daughter to marry him and his family won’t have to pay taxes anymore.”

David asked the soldiers, “What will the man who kill Goliath gets as his reward from the king?”

The soldiers told David what King Saul will reward the man that kills Goliath the giant.

Then David turned and asked another soldier the same thing. Some soldiers overheard what David was saying, and they told King Saul about it.

David said to Saul, “Your Highness, that giant Goliath are laughing at us and turning us into cowards. I will go and fight him.”

Saul answered, “You will surely be beaten down by Goliath. He works as a soldier all his life.”

David said, “I look after my father’s sheep. When a prey attacks the sheep, I go after it and beat it until it let go. If it turns against me, I will grab its throat and slaughter it. I had slaughtered lion and bears all my life and so I can also kill this worthless Philistine. If the Lord protected me against the lion and bears, he will surely also give me victory over Goliath.”

Saul then gave his military clothes, armor, and sword to David.

David put on the military clothes, armors and sword and walked around with it but he felt very uncomfortable.

David said to King Saul, “I am not used to all these.”

So David took off the military clothes, armor and sword and gave them back to King Saul.

David picked up his shepherd stick. He grabbed a few small pebbles from the stream and put them in his leather sling back. Then David went off to fight with Goliath.

When Goliath saw David is just a healthy handsome looking boy, he laughed at him, saying, “What! Do you think I am dog?”

David answered, “You came fighting with me with a sword, a spear and a dagger but I came out to fight you in the name of Lord God Almighty, the commander of Israel’s army! Today, I will defeat you with the help of the Lord. Then I will cut down your head and feed the corpses of the Philistine soldiers to the animals.”

Then David took a pebble and put it in its sling. David ran toward Goliath and swung the sling around.

The pebble flew out and hit Goliath right in the head.

It cracked Goliath’s skull. Goliath tumbled down and died.