You are here: Home / Children Stories / Birth of John the Baptist 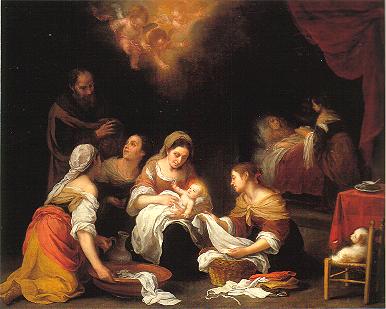 During the days that King Herod rule, there was a man named Zacharias.

Zacharias has a wife named Elizabeth. Zacharias and Elizabeth are very old and they don’t have any children.

It happened that Zacharias was performing his priestly duty at the temple of the Lord and the angel of the Lord appeared to him. When Zacharias saw the angel, he grew afraid.

The angel said to Zacharias, “Don’t be afraid. I came to bring you the good news that your wife, Elizabeth will gives birth to a son. His name shall be called John. He will never drink wine. The Holy Spirit will fill him even when he is in his mother’s womb. He will get ready the people for the Lord.”

Zacharias said, “How should I know that my wife will conceive with a child since we are already very old.”

The angel answered, “I am Gabriel, the servant of God. I was sent by God to bring you this good news. Because you don’t believe what I told you, you will be mute and unable to talk until the baby is born.”

The people were waiting for Zacharias outside the temple and wonder why he took so long.

When Zacharias came out, he made signs to the people. They realized that Zacharias couldn’t speak.

Elizabeth was pregnant as the angel told Zacharias and she gave birth to a son.

When their relatives asked what name should be give for the baby boy, Elizabeth told them she wants to name her baby John. But they said that there is no one in the family called John.

Then they asked Zacharias. And Zacharias wrote John on the paper. Thus, the baby was named John.