You are here: Home / Children Bible Stories / Bible Story of Isaac and Rebecca 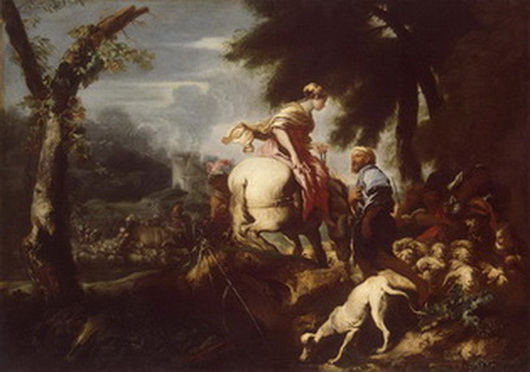 Abraham is very old now. So he called his faithful servant, Eliezer, to him.

Eliezer replied, “What if the woman refuse to come back with me? Should I bring Isaac back to the home land?”

Abraham said,” God will send an angel to be with so that you will take a wife for my son there. If the woman doesn’t want to come back with you to this land, then you will no longer be bound under this oath.”

The servant, Eliezer, took 10 camels along with him and set out for Nahor. Eliezer arrived at a well outside the city. He then made his camels kneel down by the well.

Eliezer prayed, “Lord God, the young women are coming out of the city to fetch water from the well. Please make the girl whom I said, ‘Please let down your pitcher so that I can have some water to drink’ and she says, ‘Drink, and I will also water your camels’ be the one whom you had appointed to be Isaac’s wife. So that I will know that you have shown kindness to my master, Abraham.”

Before Eliezer finished speaking, a beautiful young woman called Rebecca came out from the city to fetch water with the pitcher on her shoulder.

Rebecca is the daughter of Bethuel, the son of Milcah. Milcah is the son of Nahor. Nahor is Abraham’s brother.

Eliezer said to her, “Please let down your pitcher so that I can have some water to drink”.

After the camels had finished drinking, Eliezer took a very expensive gold nose ring and two hand bracelets and give it to Rebecca.

Rebecca told Eliezer where she was the daughter of Bethuel, from the family of Nahor.

Rebecca’s brother, Laban ran out to meet Eliezer who is by the well.

Laban invited Eliezer to spend the night at their home. Eliezer also give gifts of silver, gold, and clothing to Rebecca. He also gives gifts to Rebecca’s brother and mother. And they eat and drank all night.

When morning arrives the next day, Eliezer wanted to return to Canaan immediately with Rebecca. But Laban said, “Please let Rebecca stays with us for a few more days.”

Eliezer said, “Please don’t stop me from returning to my master.”

Laban said, “Let us call Rebecca and see if she is willing to go back with you now.”

When they arrived home, Isaac saw Rebecca and was very happy. Isaac then took Rebecca as his wife.