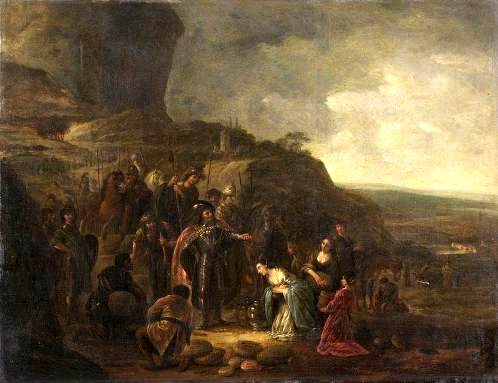 Nabal was a very rough and mean man; but Nabal’s wife, Abigail was a very pretty and wise woman.

One day, Nabal’s servants were sheering wool from their sheep at Carmel.

David heard about it and he sent 10 men to Nabal, saying, “I hope everything is well with you and your family. When your shepherds are at Carmel tending the sheep, we didn’t hurt them or steal anything from them. You can ask your shepherds, and they’ll tell you the same thing. Today is a day of celebration; please share with us some of the food you’ve cooked.”

David’s men went to Nabal and gave him the message but Nabal replied, “Who does David think he is? David is just a slave who listens to his master. What makes you think that I will share my food and water with you? I also don’t know whether you are really sent by David!”

David’s men returned to David and told David what Nabal had said.

David’s anger was aroused and he said to his men, “Everybody strapped on your sword!” Four hundred men strapped their swords; but two hundred men stayed behind to guard the camp.

They never hurt us or steal anything from us. They are always nearby when we are tending the sheep and goats. With them around, we are as safe as we are inside a walled city.

Please come up with an idea to help us because David and his men are on his way to kill his family and everyone who works for him.”

Abigail quickly loaded 200 loaves of bread, 2 large jar of wine, meat of 5 sheep, 1 big sack of roasted grain, 100 handfuls of raisins, and 200 handfuls of figs on the donkey.

Then she rode her donkey. Abigail didn’t inform Nabal that she took food for David.

On the way, Abigail met with David and his men and she bowed down to David.

Abigail said to David, “Please let me explain! Don’t pay attention to what Nabal, the fool said to you.

Please accept these gifts of food that I have brought to you.

God had kept you from doing evil things and killing innocent people.I pray that you will not commit evil crime for as long as you live.

I pray that anyone who tries to harm you will end up like Nabal. God will always protect you because you fight for him.”

David accepted the gifts of food from Abigail. David said to Abigail, “You can go home now. I will not harm Nabal and his household.”

Abigail returned to her home. When she arrives home, she found Nabal was celebrating with his servants in a party fit for a king.

Nabal was very drunk so Abigail didn’t tell Nabal about it until the next morning.

The next morning, Nabal was sober and Abigail told him everything that had happened yesterday.

Nabal was a very stingy person. He couldn’t take it and he have a heart attack. After 10 days, Nabal died.

When David heard that Nabal is dead, he praised God because He had kept him from taking revenge on Nabal and his household.

Then David sent messengers to Abigail to ask her to be his wife.

Abigail quickly saddled her donkey and went to meet David. David and Abigail were married as soon as Abigail arrived.