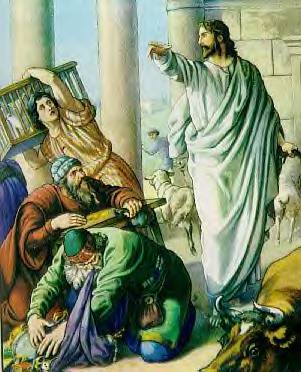 When the Passover was around the corner, Jesus traveled down to Jerusalem.

When Jesus entered the temple, He saw many people were buying and selling animals including sheep, oxen and doves, and the money changers were doing business there as well.

Jesus grew angry. He made a whip from cords and He started to chase the people who are selling in the temples out.

Jesus poured out the money of the moneychangers and overturned the tables they used for changing money.

Jesus said to those who are selling doves in the temple, “Take these things away because this is the House of God. Don’t make the temple a place where you can sell your merchandise!”

And He pointed out the Scripture,

The Jews said to Jesus, “What sign can you show to us as proof since you are doing these things?”

Jesus replied, “Tear down this temple in 3 days and I will be rebuild it in 3 days.”

The Jews said to Him, “It took 46 years to build this temple, and you can rebuild it in just 3 days?”

Jesus was talking about His preeminent death on the cross and resurrection after 3 days.

After Jesus had died on the cross and risen on the third day, His disciples remembered what Jesus said.

Jesus taught in the temple every day.

The chief priests, the scribes and the leader of the Jews were jealous of Him and made plans to kill Him.

But they couldn’t do anything to Jesus; because the people paid attention to what Jesus said and listened to Him.