You are here: Home / Animal Stories / Balaam And Donkey 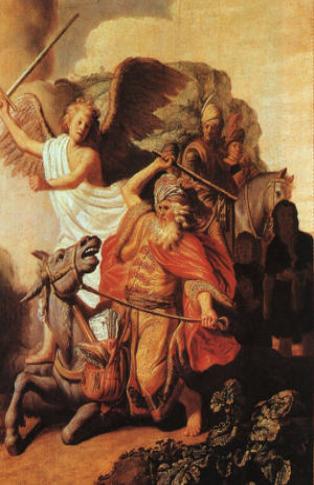 The Israelites camped at the plains of Moab which was across from Jericho.

The messenger departed and arrives at Balaam’s home. They told Balaam about the Israelites and that King Balak had sent for him to come put a curse on the Israelites so that he can defeat them.

Balaam said to King Balak’s messenger, “Spend the night at my place while I go and seek the Lord and get an answer from him.”

God answered, “You should not go with the messenger to King Balak. The Israelites are my people. Don’t curse the Israelites because they are blessed by Me.”

Balaam woke up the next morning and told them that the Lord does not want him to curse the Israelites.

King Balak was not satisfied with Balaam refusing to come and curse the Israelites. So he sent more princes to Balaam this time.

The messenger departed to Balaam the second time to ask him to curse the Israelites.

When Balaam saw the messenger, he said, “Even if you give me a house full of gold, I will never go back with you to curse the Israelites for King Balak. Please stay at my home tonight and I will go and ask the Lord about it.”

At night, Balaam asked God about the matter. God answered, “Go with them. But you must listen to me and only do what I tell you to do.”

On the way, the angel of the Lord came to stop Balaam.

Balaam’s donkey saw the angel with the sword in front of him so it turned to the wrong way to avoid the angel.

Then the angel stood in a narrow path between two vineyards.

When the donkey saw the angel blocking the way, it went straight against the wall so that Balaam’s foot touches the wall.

Balaam was angry and he hit the donkey with a stick again.

The angel went further and stood between two walls. When the donkey saw that it can neither move right or left, it lay down.

Balaam became angry and hit the donkey for the third time.

Then God opened the mouth of the donkey so that it speaks. The donkey says, “Why did you hit me? Did you not ride me for years until now and have I ever disobeyed you?”

Balaam replied, “Because you have abused me, I wish I can kill you with a sword now.”

Then God opened the eyes of Balaam and he saw the angel standing there with the sword.

The angel of the Lord said to Balaam, “Why did you hit your donkey? If it wasn’t the donkey that avoids me, I would have killed you.”

Balaam said, “I had sinned against the Lord. I didn’t realize that you were stood in the way. If God doesn’t want me to go with the messenger to King Balak, I will go back home.”

The angel of the Lord answered, “Go with the men but you must only do what I tell you to do.”

So Balaam went with the princes to King Balak of Moab.