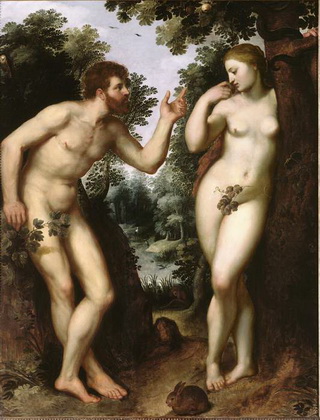 God created Adam and Eve and put them in a garden called Eden in the east.

Now God told Adam and Eve that they can eat the fruits from any tree in the garden except from the tree of life and the tree of knowledge of good and evil.

The tree of life and the tree of knowledge is located at the center of the garden.

One day, the serpent who is crafty and cunning than any other animals said to Eve, “Did God tell you not to eat the fruit from the tree in the garden,”

Eve replied, “God said we can eat any fruit from any tree in the garden except the fruit of the tree which is located in the center of the garden lest we die.”

The serpent wants to trick Eve into disobeying God’s command and so it said, “You shall not die from eating the fruit of the tree in the middle of the garden but you will be like God, knowing good and evil,”

The fruit looks delicious to Eve. Eve believes the serpent and desire for the fruit. Eve plucked a fruit from the tree of knowledge of good and evil and eats a mouthful of it. Then he gave Adam and he ate it too.

Straight after they ate the fruit, their eyes opened and realized that they were naked. They feel shy and quickly sew fig leaves to cover up their naked body.

Later on, they heard the sound of the God walking in the garden and Adam and Eve hid themselves. Then God called out to Adam and Eve.

Adam said, “I heard your voice and I hid myself,”

And God said, “Who told you that you were naked?”

Adam said, “Eve gave me some fruit from the tree of knowledge of good and evil and I ate some,”

God was very angry with Adam and Eve because they did not listen to his command.

God cursed the serpent that people will always strike its head with a club and that it will crawl on its belly forever.

God also punished Adam that he will only reap from the ground of what he toiled.

God put a curse on the women that from now on women will have labor pain when giving birth.

Because of what Adam and Eve had done, God also make sure that humans will never live forever like God and that they will die one day and return to the dust in the ground.

After that, God drove Adam and Eve out of the Garden of Eden.