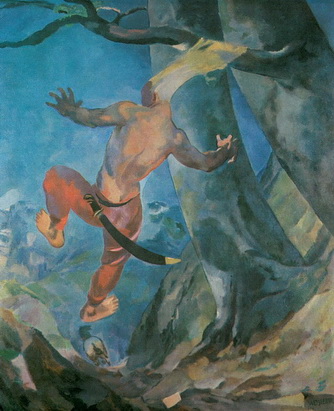 When Absalom find out that Amnon raped Tamar, he hated Amnon very much.

Soon Tamar moved into Absalom’s house, but she is always sad and forlorn.

When David heard about what Amnon did to his daughter, Tamar, he was very angry but he didn’t do anything because Amnon is his oldest son and his favorite.

After two years, Absalom’s servants were cutting wool from the sheep at Baal Hazor. Absalom invited all the king’s sons to celebrate with him.

But David said, “We are not going because it is too expensive for us.”

But Absalom said, “If you don’t want to go, please let my brother Amnon go with us.” David agreed to let Amnon and all his sons go to the feast that Absalom had prepared.

Absalom prepared a luxury banquet but he ordered his servants, saying, “Watch out for Amnon. When he gets a little drunk, I will give you the signal and you will kill Amnon.”

All the other king’s sons quickly rode away on their mules and escape to Jerusalem.

While the king’s sons were on their way to Jerusalem, someone came and told David, “Amnon had killed all your sons!”

When David heard this, he tore his clothes and lay down on the floor.

A guard noticed some people on the road to Honoraim. Then Jonadab said, “Your Majesty, here come your sons.”

As soon as David’s sons came in, they wept aloud. David and his officials wept too.

David felt depressed because Amnon is dead and no more.

After Absalom had murdered Amnon, he ran away to his mother’s Maacah’s father kingdom, Geshur to hide from David.