You are here: Home / Children Bible Stories / Abraham and Isaac 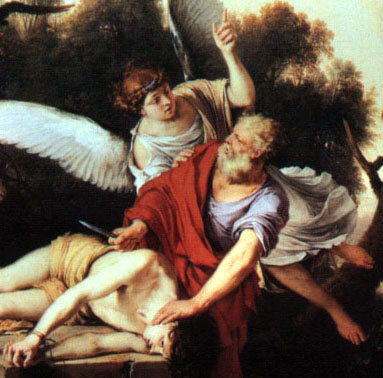 God decided to test Abraham’s faith. So He called out to Abraham, “Abraham!”

Abraham replied, “I am here.”

God said, “Go to Moriah to offer Isaac as a sacrifice in one of the mountains which I will show you when you get there.”

Abraham obeyed God. Abraham woke up early the next day.

Afterwards Abraham prepared the wood for the burnt offering. Then he saddled his donkey with Isaac along with two young men to Moriah.

After three days of journey, Abraham saw the place within a distance.

Abraham told his men, “Stay here to guard the donkey while I went ahead with my son Isaac to offer sacrifices to the Lord,”

Then Isaac asked his father, Abraham, “Father, I can see that we have woods, but where is the lamb for the burnt offerings.”

As Abraham was about to kill Isaac, an angel of the Lord stopped him.

The angel said, “Don’t lay hand on your son. I know that you are a man of faith and fear God because you have not withheld your son to me.”

Right after the angel finished speaking; Abraham saw a ram caught in the bush. Abraham killed the ram and offered it as a sacrifice for the Lord.

Then the angel of the Lord called out, “Because you have not withheld your son from me, I promised I will bless you so that your descendants will be numerous like the stars in the sky and the dust in the sand. Everyone will be blessed through your seed.”

Later, Abraham and Isaac went back to his men and they returned to Beersheba.