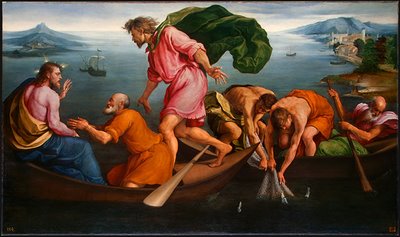 They got into a boat and try to catch fish. They were fishing all day long but they still couldn’t catch any fish.

At this time, Jesus appeared and stood on the shore. Jesus said to them, “Do you have any food to eat?”

They answered, “We don’t have any food.”

Then Jesus said, “Throw your fishing net on the right side of the boat and you should catch some fishes.”

So they throw the fishing net at the right side of the boat and they caught such a large amount of fishes that it was too heavy to pull into the boat.

John said to Peter,”It is the Lord Jesus!”

When Simon Peter heard John said that it was the Lord Jesus, he took off his outer garment and swam to the shore.

But Thomas, Nathanael, James and John came to the shore in a small boat with the fishes.

Although there are so many fishes in the fishing net, it was not broken.

Jesus said to them, “Come and have breakfast.” No one asked Him if He is Jesus because they know it is Jesus. This is the third time that Jesus had showed Himself to His disciples.

After they had finished their breakfast, Jesus asked Simon Peter,”Simon Peter, do you love Me more than the fishes you caught?”

Simon Peter answered, “Lord, I love you more than these. You know I love you.”

Jesus asked Peter again, “Simon Peter, do you love Me?”

Jesus said to Him, “Take care of my sheep for me.”

Jesus asked Simon Peter a third time, “Simon Peter, do you love Me?”

Simon Peter answered, “Lord, You know that I love You.”

Jesus said to Him, “Then feed My sheep.”