You are here: Home / Children Bible Stories / 12 Spies in Canaan in the Bible 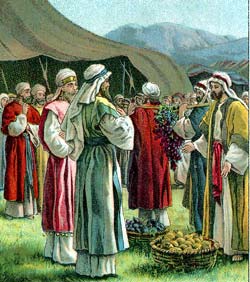 God said to Moses, “Choose twelve men, each from one tribe of Israel, and send them to spy on the land of Canaan.”

Moses obeyed God and did as He commanded. The twelve spies who were sent out by Moses to spy out the land of Canaan are Shammua, Shaphat, Caleb, Igal, Hoshea, Palti, Gaddiel, Gaddi, Ammiel, Sethur, Nabbi and Geuel.

Moses said to the twelve spies, “Go into Canaan and spy on the land to see whether the people are strong or weak; their land is good or bad; their cities have walls or just made up of camps; their inhabitants are rich or poor; and their land are covered with trees or not.”

At the time when the spies went into Canaan, it was grape season. The 12 spies went as far as the Wilderness of Zin and Rehob.

It was there that they saw the three giant descendants of the Anak, who were Ahimai, Sheshai, and Talmai.

Then they came to the valley of Eshcol and found many vine plants there. It was the grape season so the vine plants were heavy with cluster of grapes on them.

The 12 spies cut down one of the branches of the vine plant that is full of grape fruits.

The branch of grapes is so heavy that they have to carry it on a pole.

And so the place is called Eshcol because the 12 spies cut down the branch with one cluster of grapes at that place.

They also plucked some pomegranates and figs and took along with them back to their camp in Paran.

After forty days, the twelve spies finished spying on the land and returned to Moses. When the 12 spies returned to Paran, they showed the people the fruits.

The 12 spies said to the crowd, “The land of Canaan is a very fruitful land. However, the Anak lives there. The Anak are so huge but we are small like a grasshopper to them. The Amalekites dwell by the sea in Canaan.”

When the Israelites heard the report of the 12 spies, they grew afraid and dare not go up to Canaan.

Caleb trusted God. He quieted the people and said, “We don’t have to worry that the people there will overthrow us. God will fight for us and we can easily conquer them.”

But the Israelites don’t believe Caleb and they said to each other, “Let us choose a leader among us to lead us back to Egypt.”

Only Joshua and Caleb believe that God will help them to defeat and conquer the Canaanites. The Lord was very angry that the people did not want to listen to Him.

Moses cried out to the Lord and begged God to forgive the Israelites.

God listened to Moses’ prayer and spare the lives of the Israelites but He promised that the people above twenty years of age will never be able to enter Canaan.

The eleven spies whom Moses sent out brought bad report, so the Lord afflicted them with a plague and they died before Him. But Joshua and Caleb remained alive.