You are here: Home / Children Stories / The Fir Tree 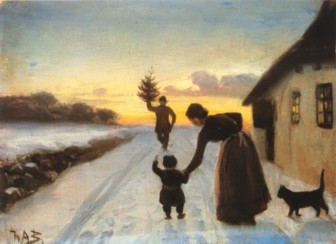 In the middle of the forests, there was a nice little fir tree. The place where the fir tree is has lots of fresh air and sunshine.

The fir tree like the children to praised him but he couldn’t stand when they called him little. The fir tree wishes she should grow up fast.

The fir tree felt very miserable. Not even the sunshine, birds, and red clouds that passed by her makes her happy.

During the winter, a hare would always come and hop over the little fir tree. This annoyed the fir tree very much and she hope to grow up faster all the more.

After a few years, the little fir tree had grown up to be a tall fir tree. In the autumn, the wood cutters always come to fell down some of the tall trees.

When the fir tree saw this, she was scared and wonders where they all go.

During the spring, the storks and swallows came and the fir tree asked them, “Do you know where all these fir trees go after they are fell down by the woodcutters?”

The swallows don’t know about it; but the stork mused on it for a while and says, “While I was flying across the ocean, I saw these fir trees on the ship.”

The fir tree asked, “What is the ocean? How does it look like?”

The stork replied, “You don’t need to know because it will be very hard for you to understand.”

When Christmas are coming, many young fir trees were being cut down. Some of them are not even as old as the fir tree.

The fir tree asked, “Where are these fir trees going? They are not even as tall as I am!”

The sparrows who happened to pass by says, “We peeped into the window of the houses and saw these fir trees there. They are placed in the middle of the living room with lots of beautiful ornaments on it.”

The fir tree asked, “And then what happened to them?”

The sparrows replied, “We don’t know. But they are really beautiful!”

The fir tree says, “This is wonderful! How I wish I would become of those tree in the living room that are decorated with ornaments!”

The fir tree grew taller and taller. When it was near Christmas, a woodcutter cut down the fir tree. The fir tree dropped onto the ground with a loud sound. The fir tree did not feel happy at all because she is being separated from her home.

The fir tree kept on grumbling until she was being unloaded from the cart.
A man said, “We don’t want other fir trees. We want this fine fir tree.”

Then two servants came and carried the fir tree into a large and beautiful drawing room.

They put the fir tree upright in the sand and then decorated it all kinds of ornaments like dolls, toys, gilded apples and walnuts, and blue and white tapers. Finally they fixed a large gold star at the top of the fir tree. The fir tree looks splendid and beautiful beyond description.

The fir tree thought to himself, “If only the evening come quickly, then the other fir trees in the forest and the sparrows will come to look at me at the windowpanes. Will I take root here and also be covered with ornaments in the winter and summer?”

“Fire! The Christmas tree is on fire!” Someone quickly came over to extinguish the fire.

The children dance around the little tree and sing Christmas songs. The candle lights on the fir tree fell down and keep burning the tree until the very branches. When the fires are put off again, the children were given permission to plunder the fir tree. They all rush together against the tree so violently that all the branches of the tree were broken.

The children shouted, “Please tell us a story!”

A short and fat man walks towards the fir tree and sit down under it. He says, “Do you want me to you the story of Ivedy Avedy or Humpy Dumpy.”

The short and fat man tells them how Humpy Dumpy fell downstairs and marries the princess in the end.

Two mice came out of their holes at the attic and came to the fir tree. They rustled among the branches.

The fir tree answered, “I am not an old fir tree. There are many other fir trees that are much older than me.”

The mice says, “Where are you from? Tell us about the most beautiful place that you have been in this world.”

The fir tree answered, “I have never been to the most beautiful place in the world. But I know a place where the sun shines very brightly and the little birds chirp so joyfully.” The fir tree told the two mice about his childhood and they listened to her.

The mice asked, “Do you know any story?”

The next night, the mice came with another five mice and they all gathered to the fir tree. Then the fir tree tells them the story of how Humpy Dumpy fell down from the stairs and marries the princess in the end.

One mice says, “Humpy Dumpy is a very silly story. Do you know any story about cheese and bacon?”

The fir tree answered, “I don’t know any story about cheese or bacon.”

The mice says, “Then Goodbye.” All five mice left the fir trees and went back to their holes in the attic.

One morning, some men came into the attic and carried it downstairs into the garden.

When the children saw the fir tree, they are so happy and they sing and dance around it joyfully.
The fir tree saw the beautiful flowers in the garden and breathed the fresh air. Then the fir tree thought about the Christmas eve night when she was so magnificently decorated.

The fir tree says, “Everything has passed. It is all over.” The gardener boy chopped the tree into wood blocks and then uses them to make fire. The fir tree sighed every time each branches is being chopped.

The children continue to play in the garden and the youngest one wore the golden star in his breast. That is the end of the story.